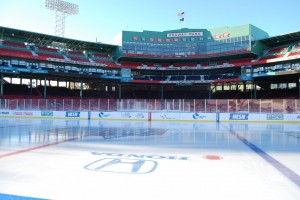 Just before our game at Fenway Park!

Recently I was given an opportunity to play hockey at Fenway Park! The men’s league I play in got a few time-slots from the Red Sox and there was a team who needed some players, so I threw my hat into the ring. There will only be a hockey rink at Fenway for about a month, so this could be a once-in-a-lifetime opportunity! Next thing I knew, there was a date and a time and I was playing in a game!

Growing up a few hundred yards from a pond, I know pretty well what its like to skate outside. It’s cold, for one. But you’re out of breath quicker and the depth perception takes a few minutes of getting used to. I couldn’t even imagine what it might be like to skate at Fenway! I assumed the ice would be terrific, given we played just two days after the NHL’s Winter Classic. And I was right – the ice was just about perfect. There wasn’t much I could do about getting out of breath quicker  – but it’s everyone else’s problem too. As for warmth, I was prepared. I wore one of those hoodie things under my helmet, a long sleeve performance t-shirt and long johns under my equipment and a thin, extra absorption sock under my regular socks on my feet. It was 23° (F) when we stepped on the ice – and the cold didn’t bother me one bit. Towards the end of the game, I actually started feeling warm, given the sun was shining and it was a beautiful day outside.

The game itself wasn’t much of a factor in my eyes. We lost, but I didn’t care at all. Just skating around that place and taking it all in was pretty special. It was expensive and I don’t take for granted how lucky I am to have been able to do it.

The accomodations were the only drag. They herded both teams off into a curtained-off area near the third base concession stands and there were no benches to get dressed on. So we all had to stand up and get dressed, then walk down through the third base box seats, onto the field and over to the benches, where you then had to put on and lace up your skates. Many of you don’t play hockey, I know that, but for those of you that do, you can understand why it might be a little difficult to get dressed standing up the whole time. They could have at least provided benches! The funny thing was that after the game, as we got herded back to the “locker room,” someone had stacked up some benches. Yeah, thanks!

The other bummer was that they didn’t allow any photography or video. Of course, I paid no attention to that creed and walked right out onto the ice with both my video camera and my still camera. I was discreet about it, but I did manage to grab some pictures and I’ll upload a quick video I shot later on.

All in all, a total thrill to do that.