All You Have To Do Is Act Naturally

The idea of aging gracefully in a rock and roll band is largely non-existent. There just aren’t many (any?) bands who can pull it off. The Rolling Stones are basically cartoons now and have been since, oh, let’s call it 1990. If they don’t exist already, you could probably write whitepapers and hold seminars about U2. Trying too hard to be relevant isn’t the same thing as aging gracefully, guys. The Who are on, what, their 7th farewell tour? Blah. Shall we talk Lynyrd Skynyrd? Bob Dylan?

There are flashes. REM has shown some light, but it’s really a mere flicker. Tom Petty, I guess, but no one goes to his shows to see Mojo performed live, do they? His fans will put up with it, I suppose, and they will shrug later and say “the new stuff sounded good” but the next day it’s forgotten. They are there to see “Refugee” and “American Girl.” Don’t kid yourselves.

So who ages gracefully? There aren’t many. The wise ones are the ones who change with age. Nick Lowe, for example. As a youngster, you have a rather amazing, beer-swilling, fun-loving  pub band called Brinsley Schwartz. That turns into the fabulous Rockpile. It suddenly goes nuts when Nick goes solo in the late ’70s and early ’80s and captures Elvis Costello’s ear. Lowe goes on to produce Costello’s first FIVE albums. So despite Nick largely being known as a one-hit wonder, he puts out more good music than just about any band of that era. Seriously. Have you heard “The Best of Nick Lowe?”  If you don’t think “And So It Goes,” “Born Fighter” and “Heart of the City” are even BETTER than “Cruel To Be Kind,” then your musical soul is lost. The guy is a machine. Then Nick starts getting old. And instead of trying to replicate “Cruel To Be Kind” and be seen as a laughingstock, he actually changes his game. Mellows out. Records music for the robe and pipe crowd. And you know what? It’s GOOD! Nick can write songs AND craft them. He still does to this day.

Which brings me to Teenage Fanclub. I’ve mentioned my history with this band on this blog previously. They were the first band I ever saw perform live in a nightclub, on February 14, 1991. Cruddy little club in Cleveland on a miserably cold evening. It changed my life. I mean, it literally changed everything for me. But that’s not what this post is about. That night, Teenage Fanclub was a band of young guys from Glasgow, Scotland. Their album “Bandwagonesque” had come out and we were just playing it non-stop at our apartment in Kent. SPIN has raved about it and eventually went on to declare it the album of the year in 1991, ahead of a little album called “Nevermind.” We were over-the-moon to see Teenage Fanclub live! And they brought it! Long hair, loud music, but still wonderfully constructed, soaring harmonies twisting in and out of their songs. This is what they looked like and sounded like in 1991:

And year after year, album after album, they evolved. And they still killed it pretty much each and every time. Their 1997 album “Songs From Northern Britian” may very well end up as one of my Top 10 favorite albums of ALL TIME. The harmonies were still there, the songs were still there, the writing was still there. Only over the years it changed, ever so slightly. They started getting old and smart enough to realize that the people who were there in 1991 in the cruddy clubs were the ones who were aging and changing along with them. So they crafted record after beautiful record, until I realized in the last few months, or maybe subconsciously all these years, that their lifespan as a band has almost mirrored my lifespan since that night in 1991. Loud, aggressive and full of piss as youngsters and now a little more chill and relaxed. But still appreciate a great beer and loud song now and then.

They now look old. All of them.  The singer looks like he should be on a sitcom about the zany antics of a plumber and his wife or something. He’s a middle age guy in his 40’s who just happens to write, craft and sing songs better than just about anyone else I’ve heard. The guiter player looks like the guy who listens to Nick Lowe now – graceful, aging, quiet. But they still play the old stuff and it still sounds awesome! And loud. But then they play 2006’s “Cells” and it fucking KILLS you!

See? It’s mellow, but it still brings the force about halfway through. They are magic. Just a magic band. It’s not as course and tough as “What You To Do Me” but it’s just as effective. When I was 20, “What You Do To Me” was IT. When I was 35, it was all about “Cells.” Two completely different songs by a band that aged gracefully.

Tonight was special. They played the wrong venue, so the vibe was weird. There were 2-3 songs that shouldn’t have been in the set. But the other 12-14 songs were a band that hasn’t changed at all, but a band that has completely changed. That’s kinda hard to explain and it doesn’t make sense, I know. But I can tell you that their progression as a band mirrors my progression as a music fan. And a person. And that’s a powerful connection to have to a bunch of guys who just make music.

And if you want something truly beautiful, listen to Baby Lee, their latest song. It ranks right up there with their best and you’ll be stuck singing it. Trust me. I know because it’s the third time I’ve posted it on this blog. I am determined to get you to listen to it. Or stubborn. Probably both.

….and here’s what they look like today: a bunch of guys who probably have 3 year old kids, right? 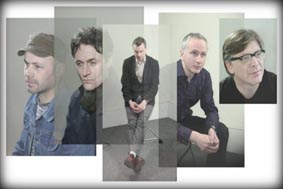