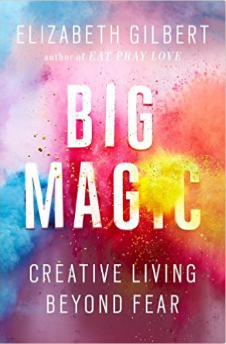 The strangest things can sneak up on you and give you inspiration.

Stephanie told me months ago that I need to read this book, “Big Magic,” by Elizabeth Gilbert. I was probably reading something else at the time, or too engrossed in magazines or reading news on my IPad.

I remember looking at it, though, with its pastel colors and its clear self-help subtitle on the front: Creative Living Beyond Fear. I also saw that it was the author who wrote Eat Pray Love and it just felt to me like a book that, perhaps, was more targeted to females, since I’d never seen a male reading Eat Pray Love.

Really, I don’t know. Maybe I just dismissed it as some new-agey thing, but honestly I don’t remember why I didn’t read it right away.

It turns out that the age-old adage about never judging a book by its cover whacked me about the head like a old man wraps his wrinkled hand around a newspaper to whack a dog for shitting on the rug.

Never judge a book by its cover. This adage rings so true most of the time. As I get older, I often walk by people on the street and wonder what’s going on in their life, in their head.

Are they anxiety-ridden? Are they blissful? Mad? Sad? Happy? Manic? I don’t know. I just know that I haven’t walked in their shoes for a single second of time, so I pass them by, without any judgement. It comes with age, believe me. I wasn’t always like that. I like this way better.

It turns out that “creative living beyond fear” has only a little to do with being afraid and has much more to do with……doing. Do stuff. Create stuff. Who cares who sees it? Who cares who likes it or dislikes it? Do stuff. The book is a quick read and it’s quite motivational. More than I ever thought. I’m kicking myself for not reading it earlier. It would have sold more if the cover was black and white.

So what am I going to do? Hell if I know. I’ve had a book idea rattling around in my head for years. Years. I don’t know if I have time to do that. Am I not recognizing some kind of subconscious fear by already saying I might not have time?

Part of my job involves creating. Always has. But this is different. At work, I’m creating for someone else, for the goal of an entity. I need to do something for myself. Stay tuned. This is going somewhere.

Elizabeth Gilbert, of all people.

Here’s hoping another six years doesn’t pass without me doing……something.