Music of the Naughts: The New Pornographers 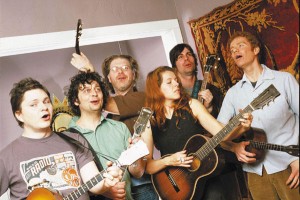 When I think of positively infectious music, the first band that comes to my mind is The New Pornographers. This band is a buzzing beehive of electric tastiness. You know how when you were a kid there was always that one treat that you just couldn’t stop eating? Do you remember that feeling you got each time when you put it in your mouth, the sweet, swirling combination of freedom, sweetness and happiness? That is The New Pornographers. They are a seven piece band (be still my heart), hailing from Canada and featuring Neko Case, another kind of sweet altogether. Case has one of those voices from the heavens. When she sings with the band or on her solo albums, you literally can see angels and rainbows and it makes you want to start hugging everyone around you.

But that’s not all, because there’s another songwriting powerhouse in the band as well, in the form of Carl Newman, whose solo stuff is splendid in his own right. But as much as I like Case and Newman on their own, put them together and it’s obnoxiously awesome. I mean, totally insane awesome. As if those two weren’t enough, Dan Bejar is a third vocalist and total wild card. If you’ve seen them live, you know what I mean.  Anyway, if you are at all a fan of rock music, pop music, or ANY music, there is no way you can’t like this band. That’s a pretty heavy guarantee, I know, but it’s just so good. SO good.

That said, I need to include THREE songs here, one from each singer. Turn up and DEVOUR!

“From Blown Speakers” (from the 2005 album Electric Version, Carl Newman on vocals) —– [audio:blown.mp3]

Well, I’ve cleared the cobwebs from the blog and I’m back. I officially took 12 days off of blogging, which might be my longest stretch other than my trip to Hawaii some time ago. This break is combined with my work break – we always get the week off between Christmas and New Years, so I try to minimize computer use during that time. Drying out, if you will.

1. During the break, I stunned myself by successfully installing an actual flush-mounted ceiling light similar to this one. This involved actually shutting off the electric in that area, disconnecting an old light and reconnecting a new one and assembling it. Many of you probably scoff at this and say to yourself how easy it is. But you don’t know me and house-fixing stuff. So when I did it, I was shocked. And proud. And stunned.

2. I can’t (or won’t) go into as much detail as I have in the past, but here are my top records of 2007. It was another damn good year. I have a feeling I didn’t catch as much as I usually do because of the twins arrival in June, but a LOT of good stuff came across my ears this year. Here’s the highlights:

The first one listed is my favorite, the rest are in no particular order.

Band of Horses, “Cease To Begin”: Ben Bridwell and crew have no idea whatsoever what the adage “sophomore slump” means. Their second album is chock full of epic, soaring and memorable tunes. Nowhere else can a song contain a trite lyric like “the worlds such a wonderful place” and sound so damn good. Here’s a terrific cut from the album, called “Cigarettes, Wedding Bands”

Kings of Leon, “Because of the Times”: Their show in October here in Boston was a bit of a coming-out party for me – it was the first show I’d seen post-twins and it was a hell of a way to jump back into the fray. Tight pants and a tighter band made me really revisit this record and I quickly realized that, yes, it’s possible to still like radio-friendly old-school rock and roll. Here’s “On Call”:

The New Pornographers, “Challengers”: god bless this band. If there’s any band out there making instantly memorable, hum along, have-it-memorized-in-five-minutes music, it’s this sweet band of Canadians. As usual, there’s too many good songs to choose from so I’m just literally going to close my eyes and stick a pencil on a song title. Enjoy “All The Old Showstoppers”

Youth Group, “Casino Twilight Dogs”: This one came out of nowhere. My friend Dave sent along the recommendation so I checked out a few songs and WHAM! It just hit me like a ton of bricks. They’re Australian and while some of their songs are Dylan-esque, others become their own due to the singer’s excellent voice. Check out this two-and-half-minute gem called “TJ” and know (and appreciate) that their sound varies from this. Very good stuff.

The Frames, “The Cost”: How exactly did I miss this band for so long??? I actually saw them a few years back in Boston and really liked it, but just never got around to picking anything up by them. What an ass-tard I was for that! The good news? Not only did I have their fabulous 2007 album to listen to, but I also got to go back and enjoy the many others they have! I love that. So, here’s the skinny: they’re Irish, their songs are just……grand and they have an intense and very talented songwriter and singer (see here for a much better write-up than I’ll ever put forth). Please enjoy “Falling Slowly” here, because I think it might be my favorite song of the year.

Fionne Regan, “The End of History”: I don’t know. Typically I dislike the whole “boy and his guitar” thing, but once in a while you hear something that just picks at you. This is one of them. Regan’s a young, talented and apparently simple songsmith whose songs leave you saying something along the lines of “I can probably play that. And sing it just as well.” But you just know you can’t. It’s one of those deals where he just makes it sound so damn easy. I’m jealous. I would have gotten more girls in school if I did what he does. Listen to “Put a Penny In The Slot.”

There you have it. I also did like Wilco’s newest offering and I guess it should be included here, but I cooled off on it too quickly, despite really loving “You Are My Face.” And so many people said that “Ga Ga Ga Ga Ga” was Spoon’s best record yet. I couldn’t disagree more. There’s a couple of spots there, but I was so disappointed by that one. Drats. I also discovered two 2006 offerings that warrant mentioning here: Field Music’s “Write Your Own History” and Midlake’s “The Trials of Van Occupanther” both offer similarly rich and very listenable, inventive music. I’m sorry to have missed those in ’06, but you can’t get ’em all.