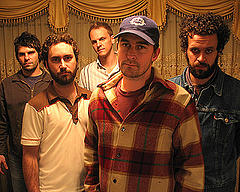 This Could Be Any Band (It's Really Milton Mapes)

Everybody has their secrets. I think at least half the people I know feel like they know about a band that NO ONE else does. Admittedly, that’s a really cool feeling. Even if it’s just one person next to you in the car and you can play some new music for them, you feel like the tastemaker. Of course, the old adage about one man’s trash being another man’s treasure is so true. I’d imagine that for as many times I’ve been the guinea pig for someone else’s secret, I’ve been the one wearing the lab coat. And when I hear someone else’s obsession, sometimes it hits and sometimes it doesn’t. Much the same way for when I try to turn someone on to something. Earlier this year I turned someone on to Anders Parker. What a thrill that was.

And I’ll never stop trying. Not because I’m trying to be the tastemaker, either. My younger days of craving attention and praise for being the tastemaker are long over. I took that about as far as one could take it, when I really think about it. I started a damn record label! Talk about young, naive and maybe stupid, though that era of my life, call it 1994-1999, was one of tremendous, unadulterated, GREAT fun. Strangely enough, it was also the time in my professional life when I made the least money. That fact probably deserves more exploration, but let’s table that one for now.

Anyway, the reason I’ll never stop talking about music and obscure bands to anyone who will listen to me is because I truly believe (and it’s not hard to prove, really) that there is music out there that just needs to be heard. That deserves to be heard. That should be heard. Just because a person or a band didn’t “make it” doesn’t mean they didn’t (or don’t) make meaningful, powerful music. Anders Parker, for example. By the way, don’t think I’m some obscure music junkie. I can completely appreciate a good pop song that hits Billboard, too. Look no further than Kelly Clarkson’s “Since You’ve Been Gone” or even that Katy Perry song “California Girls.” Seriously. It may not be credible, hip indie rock, but those are well-crafted, memorable songs. Lily Allen’s “Smile.” There’s many.

But then I think about Milton Mapes, a band that no one has heard of, really. Most of their music was released from 1999-2005. I think they’re still together, but not sure, as they also perform as a band called The Monahans now. I don’t have time to keep up anymore, really. But Milton Mapes put out a record back then called “The Blacklight Trap” that just grabbed me, for whatever reason. And ever since I got my IPod in 2002 or whenever it was, there are two songs from that album that have never left my IPod. NEVER. And I mean that. Songs come and go from my IPod because I am constantly changing it. These two songs have been there EIGHT YEARS. I can’t explain why, only that I feel some kind of connection there. Obviously. So I want you to hear it. If you don’t like it, hey, that’s fine. But if you do, I hope you love it enough to keep it on your MP3 player for years.

People of Facebook, go here to hear the music.

Milton Mapes, “In The Corner Where It All Began”