The Courage to Wait….

I’ve talked a bit here in the past about Midlake. They are a Denton, Texas based band whose previous albums have been rather superb. Their last offering, “The Trials of Van Occupanther,” was a hipster’s dream, full of lovely little 70’s am gold songs and indie rock that all just…..fit together perfectly. Well, this past week Midlake threw us a knuckleball with their latest release, “The Courage of Others.” Gone are the memorable, near-gooey dark gems, replaced by what appears to be the second coming of Fairport Convention. I had heard rumblings that this was going to be the case, but much like “…Occupanther,” I though it would still straddle the hipster rock horse a little. It doesn’t. And yes, I love Fairport Convention’s 1968-1972 output.

The album reminds me of when I first heard the Scud Mountain Boys music. It took me nearly three months to really dig in on that band and get it. That was sometime in the mid-1990s – and I still listen to the Scuds regularly. It made it’s way into my head and snuggled in there and I can’t imagine it leaving anytime soon. That’s 15 years, so their music clearly means something to me. My comparison of the Scuds to this new Midlake album has nothing to do with sound – they don’t sound anything alike, other than the pace, I suppose.

What I mean is that “The Courage of Others” has the makings of one of those Scud albums – it will settle into a rocking chair, pull the blanket up to its neck and live warmly and snugly in my head for all eternity. But it requires work. Rocking chairs, when new, need time to develop that special comfort. Blankets need to break in. The heat takes a while to kick on. But in the week that I’ve been listening to this, I know it’s coming. The album is beautiful. Slightly morose, but beautiful. You want evidence? Of course you do. Listen to “Fortune” – click the play button below – it’s only two minutes long, too! Long live Midlake.

People of Facebook, when you’re not farming you can hear the song here.

Music of the Naughts: Midlake 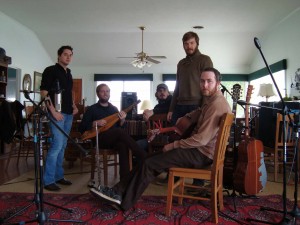 None of these people are Stevie Nicks

As the train for this decade hurtles down the track and out of sight, there’s still a few more hugely influential bands to talk about that did it for me during this timespan. Midlake has got to be one of them. The Denton, Texas-based band formed in 1999 and started off as jazz nerds, but then discovered the beauty of indie rock (Bonanos, I know you’ll love the irony of that statement). Their first full-length, “Bamnan and Silvercork” had some gorgeous moments, but it wasn’t until 2006’s “The Trials of Van Occupanther” that Midlake really moved the needle. It is, without pause, one of my favorite albums of the decade.

Many people consider “Van Occupanther” to be strongly reminiscent of Fleetwood Mac’s golden 1970s era sweet pop. I really don’t. One of the stronger songs on the album, “Head Home” is probably the only song that really rings that bell and that’s mostly because of the multiple vocals cruising beautifully during the chorus of the song. It’s a hell of a song, for sure, but it doesn’t even come close to defining the band, because if you haven’t heard “Bandits,” the breathtaking “Branches,” or the sheer wonderment of “Roscoe,” well then, you should. Because these guys are for real. I mean it. They’re accessible enough for you mainstream radio listeners and hip enough for us music snobs. Check out “Head Home” and “Roscoe” below.

Drugs Make Me Want To Sit Next To You

A couple of bits from the last few days:

Well, I’ve cleared the cobwebs from the blog and I’m back. I officially took 12 days off of blogging, which might be my longest stretch other than my trip to Hawaii some time ago. This break is combined with my work break – we always get the week off between Christmas and New Years, so I try to minimize computer use during that time. Drying out, if you will.

1. During the break, I stunned myself by successfully installing an actual flush-mounted ceiling light similar to this one. This involved actually shutting off the electric in that area, disconnecting an old light and reconnecting a new one and assembling it. Many of you probably scoff at this and say to yourself how easy it is. But you don’t know me and house-fixing stuff. So when I did it, I was shocked. And proud. And stunned.

2. I can’t (or won’t) go into as much detail as I have in the past, but here are my top records of 2007. It was another damn good year. I have a feeling I didn’t catch as much as I usually do because of the twins arrival in June, but a LOT of good stuff came across my ears this year. Here’s the highlights:

The first one listed is my favorite, the rest are in no particular order.

Band of Horses, “Cease To Begin”: Ben Bridwell and crew have no idea whatsoever what the adage “sophomore slump” means. Their second album is chock full of epic, soaring and memorable tunes. Nowhere else can a song contain a trite lyric like “the worlds such a wonderful place” and sound so damn good. Here’s a terrific cut from the album, called “Cigarettes, Wedding Bands”

Kings of Leon, “Because of the Times”: Their show in October here in Boston was a bit of a coming-out party for me – it was the first show I’d seen post-twins and it was a hell of a way to jump back into the fray. Tight pants and a tighter band made me really revisit this record and I quickly realized that, yes, it’s possible to still like radio-friendly old-school rock and roll. Here’s “On Call”:

The New Pornographers, “Challengers”: god bless this band. If there’s any band out there making instantly memorable, hum along, have-it-memorized-in-five-minutes music, it’s this sweet band of Canadians. As usual, there’s too many good songs to choose from so I’m just literally going to close my eyes and stick a pencil on a song title. Enjoy “All The Old Showstoppers”

Youth Group, “Casino Twilight Dogs”: This one came out of nowhere. My friend Dave sent along the recommendation so I checked out a few songs and WHAM! It just hit me like a ton of bricks. They’re Australian and while some of their songs are Dylan-esque, others become their own due to the singer’s excellent voice. Check out this two-and-half-minute gem called “TJ” and know (and appreciate) that their sound varies from this. Very good stuff.

The Frames, “The Cost”: How exactly did I miss this band for so long??? I actually saw them a few years back in Boston and really liked it, but just never got around to picking anything up by them. What an ass-tard I was for that! The good news? Not only did I have their fabulous 2007 album to listen to, but I also got to go back and enjoy the many others they have! I love that. So, here’s the skinny: they’re Irish, their songs are just……grand and they have an intense and very talented songwriter and singer (see here for a much better write-up than I’ll ever put forth). Please enjoy “Falling Slowly” here, because I think it might be my favorite song of the year.

Fionne Regan, “The End of History”: I don’t know. Typically I dislike the whole “boy and his guitar” thing, but once in a while you hear something that just picks at you. This is one of them. Regan’s a young, talented and apparently simple songsmith whose songs leave you saying something along the lines of “I can probably play that. And sing it just as well.” But you just know you can’t. It’s one of those deals where he just makes it sound so damn easy. I’m jealous. I would have gotten more girls in school if I did what he does. Listen to “Put a Penny In The Slot.”

There you have it. I also did like Wilco’s newest offering and I guess it should be included here, but I cooled off on it too quickly, despite really loving “You Are My Face.” And so many people said that “Ga Ga Ga Ga Ga” was Spoon’s best record yet. I couldn’t disagree more. There’s a couple of spots there, but I was so disappointed by that one. Drats. I also discovered two 2006 offerings that warrant mentioning here: Field Music’s “Write Your Own History” and Midlake’s “The Trials of Van Occupanther” both offer similarly rich and very listenable, inventive music. I’m sorry to have missed those in ’06, but you can’t get ’em all.