Gender equality is a hot issue as we head into the election, isn’t it? Wow. This last week has really been interesting. Infuriating. Frustrating. Even funny at times. But I’m not here to talk about gender equality in the same way that our Democratic and Republican representatives for President are. Equal pay, equal work, et al. We’ll let them handle that conversation, if that’s what it’s even called.

I’m talking about a different kind of gender equality and that is the fear that most men have of sharing and showing emotion with each other. I’m talking aside from the spousal sharing. I can’t really speak for other men (and don’t want to), but I do think men are far more fearful than women are when it comes to this. It’s not a stretch to say this. There is unquestionably a fear there – a fear of being perceived as weak. Or meek. Or incapable. Or something.

That’s right, I fear that kind of gender equality!

I’ve spent a fair amount of my life with a very few close friends. There are not many with whom I’d share really personal things. I think this is the norm with men. Women, on the other hand, seem to thrive and gain strength in numbers. In the power of many. Their relationships are meaningful, deeper and stronger than the ones men have.

I speak in generalities based on my own experience and observations. I obviously know that there are the exceptions to the norm with both genders.

I’m not saying that my friendships with other males are superficial, either. Quite the contrary. There IS something meaningful about just going out and having a couple of beers with some friends. To get away from the daily pressures of life and NOT have to be deep in thought. While our “locker room” talk may not be at the level of Trump/Bush, a fun, ridiculous and even raunchy conversation is good stuff. Healthy. Fun.

But I’m envious of these women and their relationships and have been for years. I wish it were that easy for guys. It’s just not. And it will never be. 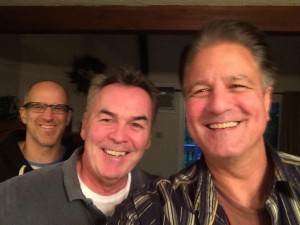 This past weekend I drove out to the Pocono Mountains in Pennsylvania to spend a weekend with two people I’ve known for about 20 years now. We had this crazy idea in the 1990’s to run a record label. The stories from that era alone are epic.

It’s basically two out of two people on Earth (who are men) for which all fear is removed when I spend time with them. We lay it all on the table, without fear and with total comfort. There is emotion. There is laughing. A LOT of laughing. There is honesty. And there is connection. It’s exhilarating.

When I get together with them at any time, I experience that connection that women seem to experience more than us men. I want more of that.

Luckily, one of them lives nearby and I see him every so often. And that’s so great. The other, however, lives further away. A flight. And while I email with him and text, I hadn’t seen him in around eight years. That’s really quite unacceptable. And it won’t happen again.

But seeing him this weekend, it felt like it had been a few days. We just clicked right back in. Magic. And we share so many similarities and personality traits that it sometimes astounds me. As I always do when I see him, I asked him to find a job up here so the three of us can play shuffleboard whenever we want. Haha.

Anyway, I don’t have a moral to this story. I just needed to get it down on paper because it’s on my mind. I love these guys. And you can probably never get enough love.