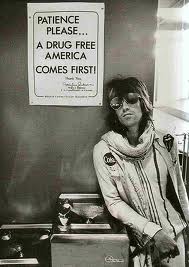 I love this picture. It is a glimpse into the mind of myself as a 19 year old. Sometimes I forget the phases I’ve gone through in my life. These pictures help me remember. This is a picture of one of the walls of my dorm in Prentice Hall at Kent State University during the winter of 1991. In this particular snapshot, you see Keith Richards on the right in the big poster. He’s got a cigarette hanging out of his mouth, a towel over his head and a shirt on that says “Who the fuck is Mick Jagger?” Classic Keith. I’ve never been a total Rolling Stones fanatic, but I have most certainly gone through phases. I was clearly in one of them here.

The three pictures on top of one another on the left are awesome. All of them are from Rolling Stone and the top two are pictures of people from the show Twin Peaks. Ah, Twin Peaks, how I loved you so much that first season. I specifically remembering how HOT all the ladies in that show were (except the pie lady). But it was Sherilyn Fenn who really knocked me out, the way she tied cherry stems in her mouth and all. Whew. We never saw enough of Sheryl Lee, either, who played Laura Palmer. Damn. The underrated Madchen Amick, too. Whew. It was an all-star lineup!

Now, the pictures in the middle are personal shots. Best I can make out, there are three pictures of our family dog, Max, who was my favorite of all our pets growing up. One is from a summer party with some friends and the other two were taken by my friend Fernando Gonzalez (see post about Food World below) at Abbey Road in London.

Really fun to see these……posters were our social media back in 1991.