Driving a hybrid car is definitely a different experience. Witness the following:

– My car offers a lot of information to a driver. I can, by toggling a single button, get access to my tire pressure (which is important for hybrids), what my average MPG is for each of my last five gas tanks, what my average MPG is in total (this was reset when I bought the car) and of course, my current MPG for the current gas tank.

– I also have access as I drive to my efficiency. What I mean is that I can see, in real time as I drive, what my MPG is. This is an interesting phenomenon. On one hand, it’s amazing to see how efficient I’m driving – while I drive. I can, and do, make adjustments based on the meter. On the other hand, I’m not sure I want to be made aware every single time I touch the gas that I’m gulping petrol. Life has enough guilt trips, so I’m not sure I need my dashboard computer giving me more. In the end, though, I have to remember why I bought the vehicle.

– The car has two driving modes that help enhance MPG. One is ECON. I don’t know the nuts and bolts of it, but I can tell you that it reduces power at low speeds when you hit the gas. This is, perhaps, where you notice the largest difference between a hybrid and a traditional gas engine car. In ECON mode, you are conserving quite a bit of fuel by not feeling that instant gratification you’re used to with a gas burner. Since I purchased the car, I have not taken the mode out of ECON. Again, remembering why I bought the vehicle.

– There is also EV mode. This seems like more a marketing feature to me, but if you’re in EV mode, it means the car is running on no gas whatsoever. This is ideal for 92 year olds who drive under 20mph all the time. After 20mph, it switches automatically to the gas/hybrid engine. So it doesn’t really do much for the average driver.

– So here’s what I’ve learned about driving efficiency: cruise control is your best friend. You get optimal efficiency by NOT pressing the gas. So don’t think of the cruise control as a traditional old-school highway tool. I use it everywhere now, to prevent me from going 35 to 40 to 35 to 30 to 40, which I have historically been prone to do. I’m really learning to drive patiently, which I think my wife will just love. It is a little amusing to set the cruise control at 25 or whatever, but the amusement or I guess the embarrassment of doing the speed limit is far overshadowed by the little readout that tells me I’m averaging 60 MPG’s by doing so.

– Embrace neutral. Drop the car into neutral on large downward hills and slopes and Earth will love you. It some cases it will throw the car into EV mode automatically, which will immediately qualify you to be Al Gore’s cousin. And you can smile as your readout again tells you you’re at 60 MPG’s.

– Warm up the car. Better efficiency when you drive a car that’s been running for a few minutes. That’s true with any car, not just hybrid.

– I haven’t driven during hot weather yet, but the word is that air conditioning detracts from MPG. Sigh. This will be a battle, given that I would probably fork over my life savings to be comfortable and cool during the summer. We will see how much it affects MPG in the summer of ’11.

So what are the results? I’ve had 6 fill-ups thus far and my average MPG is 26.9. I’m pretty sure I can do better, because on my 4th tank I put up a 27.7. This is roughly equivalent or possibly a slight improvement on my old Camry. Given my car is a 7 seat Highlander Hybrid with double the cargo space, I’m generally satisfied, but striving to improve that mpg! 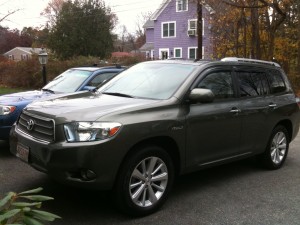 I sort of knew ever since I read that book back in 2005 that my next car would be a hybrid. However, in 2005, my car was only four years old and it was paid off. It also was not causing me any problems whatsoever. So I wasn’t exactly rushing to get myself into a new car, mostly for financial reasons. Fast forward five years to October 2010, the month which shall be forever known as the month when my trusty Toyota Camry stuck a spark plug deep into my back and twisted it crudely back-and-forth, in-and-out, forcing me to cry uncle. Three times in the space of four weeks, I had a check engine light on. $2,500 in repairs later, I knew it was time.  The third check-engine light was, perhaps, the cruelest blow.

The night before #3, Steph and I laid in bed and I sarcastically said, “well, my car will go over 100,000 miles tomorrow. Do you think the check engine light will go on again the second I cross over 100,000?” I laughed, feeling secure. Surely it couldn’t happen for a third time in a month! Not to my Toyota! The next day, at mile marker 100,015,  as I drove through Nashua , NH, the light made its appearance again, taunting me. DARING me. I could almost hear the car laughing at me. It was funny and not funny. But that was it.

Shopping for a car, to me, is terrific fun. I’ve always been very interested in cars. How they look. How they drive. New model designs, etc etc. I even have the Motor Trend app on my IPhone. Test driving, though! When else can you roam around the area and drive more-or-less whatever car you want for a few minutes? I liken it to rental cars and hotels – you still have to be respectful, of course, but in the back of your mind you know you can take some minor liberties. It’s not mine! I ended up driving the 2011 Subaru Forrester, a 2011 Subaru Outback and a 2011 Ford Edge. And while they were all good fun to drive in their own unique way, one thing was lacking for me, a guy with two kids and a family – space. The Ford Edge is awesome – a gadget lover’s dream, really, with an interior that resembles a chic nightclub. If you’ve flown Virgin America, you’ll get the picture. But they don’t have a hybrid version and the gas one gets 17-23 mpg. Not gonna fly.

You see, we already have a 2007 Subaru Forrester. While we really, really like that car – it is great fun to drive – we still have to take two cars on vacation and the cargo area of that car fills up fast. So I wanted something with space and good-to-decent gas mileage. I’d love to have one of those Ford Fusion or Prius cars that gets 38-50 MPG, but right now it’s not what our family needs. We also don’t want a minivan, not because we think they’re square or lame or whatever, but because we don’t really think we need that much space. If we had three kids, it becomes a different story. But we don’t.

So that propelled us into the option of crossovers and SUV’s. The options for gas efficient crossovers and SUV’s are fairly limited. Hybrid SUV’s and crossovers are also rare, but it’s where I think I wanted to be. I couldn’t drive a Ford Escape SUV because nobody had one. Plus I think the interior is ugly. And the cargo space in the back was roughly equal to our Forrester. They’re also re-modeling those in 2012. That pretty much left the Highlander Hybrid. My wife will tell you that I’ve been talking for years about how much I like the Highlander, both interior and the exterior. And it’s true. It’s what I’ve clamoring for since they redesigned them back in ’08. The regular Highlander is priced fairly well, but the gas mileage is SUV-like. I needed something that was comparable or better than my Camry for gas, given I’m driving a whole lot more now.

The problem with the Hybrid version is the price. It is priced at an absolute premium and out of my league. The brand new Highlanders with navigation go in the mid-$40K range and that’s kind of obnoxious. So I restricted myself to a used one and found one of them – a nice deep green 2009 Highlander Hybrid with 18,000 miles on it, loaded to the gills with options. It’s just the right amount of space – less than a traditional SUV, but bigger than the Forrester. Lots of fun on the inside – nav, bluetooth, rear DVD for the kiddos – all kinds of buttons and lights, all kinds of mileage computers and gas performance indicators. A car nerd’s delight, really. I put an offer on it that was soundly rejected. Bah. But I waited a week, increased my offer and they came down on their number and voila! Mine! The Camry? Well, I traded it in and actually did pretty well on it, given I took very very good care of that car. I really thought I would get a lot more mileage out of it – and I probably could have – but why gamble, given the month of October it had?

The early report – a delight to drive. I, of course, keep it in ECON and EV mode, so I’m getting used to a different way of driving. For example, when I step on the gas, very little happens. Oh, I move. But not like my Camry or the Forrester. There is a reason why I bought this car, after all. I suspect it goes 0-60 mph in, oh, 14 days. But once you do get to cruising altitude on the highway or to 30-40 MPH on the backroads, it’s an absolute delight to drive. Just a really great car. Now, I know I can turn off ECON and EV mode and get that more instantaneous zip when I hit the gas pedal, but I have to keep remembering what I bought the car for. Not just space, buttons and fun, but some level of responsibility with gas mileage.

Thus far I’m getting 26.5 miles to the gallon on average, which is about a mile-and-a-half better than the Camry got. It’s fun seeing all those readouts on the dashboard about my efficiency as well. It’s kind of a challenge – an adult video game, if you will. So yeah, it’s not getting 40 mpg. But it’s also pretty much the best I could do for the space I need, so I’m very very happy with it. Today I will import all my phone contacts into it, too. I loves me the extras!

The kids? Well, they call it daddy’s new Zamboni.