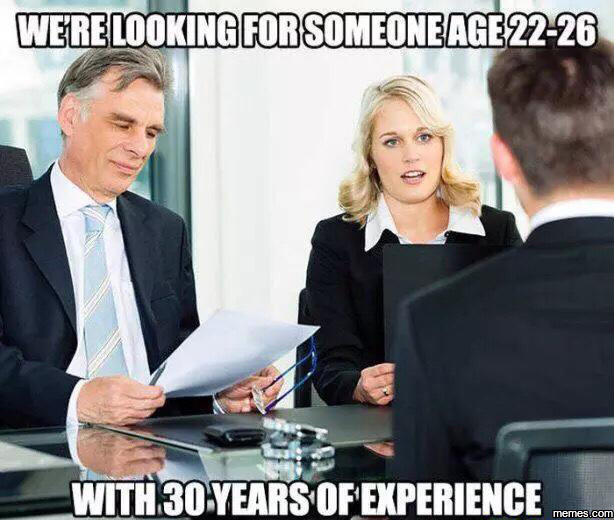 Between all the noise out there about the election, people walking off cliffs playing Pokemon GO, terrorism and whose lives matter, I came across this article this weekend about the lack of hiring of people over the age of 45. The article also mentions how the suicide rate and drug/alcohol abuse rates have spiked for the 45-54 year olds.

I consider myself blessed that my recent job search only took 10 weeks. I think the hallmark moment for me, as I look back at it, was how many roles I was qualified for (maybe even over-qualified) that went to younger, less experienced people.

Obviously, I cannot say why that occurred. The logical explanation would be that they’ll work for far less money, but I’m also not vain enough to rule out that personality matches, nepotism and of course age may have been factors.

I’m hearing this “ageism” thing more and more, though and know people my age in the job market right now who are experiencing the same thing.

One example. I began an interview process during the first week of January with a very well-known company based here in Massachusetts. Similar to my previous role, they had multiple storefronts around the country, an online business and a need for someone to handle digital marketing and social, among a few other things.

Right up my alley. I walked into the interview with the hiring manager and he spent the first 5 minutes telling me how perfect my experience was for what he was looking for. He even called me a “unicorn,” which in this case meant a “rarity.” Kind of ridiculous, really, and a term that is thrown around a little too much these days.

Anyway, two interviews went very well. But I didn’t get the gig. It’s rare to receive any kind of feedback about why you didn’t land a role, but lo and behold, this fella gave me one! He said the person who got the offer had significantly more experience.

The beauty of LinkedIn is that you can find out more. The person who got the role graduated from college less than 8 years ago and had exactly 2 years worth of experience in the particular business they were hired for. Was I bitter? Not really. I had other irons in the fire, but it sure felt a bit like age may have played a role there. Or maybe the guy was simply a liar. I’ll never know for sure.

Couple this with another emerging trend called “the gig economy” and I don’t expect things are going to get any easier for my age set. The gig economy is defined as the growing percentage of people who aren’t beholden to one company, but perform a multitude of jobs for different companies. In a word, freelancers. The article quotes an Intuit study that says 40% of all U.S. workers will fall into this category by the year 2020.

Corporations would love for this number to get to 40%. Or more. They get their ticket virtually punched to a) a cheaper workforce, because there’s always someone willing to do it for less and b) they won’t have to pay workers any full-time benefits.

The world is changing. All the time, in every way. There’s hardships no matter how old you are. We can look with envy to the younger, darker-haired workforce (the millennials!) being able to land jobs easier because of their age and/or willingness to work for less, but many of them are dealing with a crushing amount of debt and a social landscape akin to a verbal wasteland. The true effects on the economy as a whole because of that growing debt has yet to materialize, but it’s not a reach to say it’s not going to be good.

These millennials are also the first generation where nobody is looking anyone in the eyes. It’s all head down, digital 1’s and 0’s. The sociological and even physiological effects of this are years away.

I’m lucky I have a job with benefits at a great company, because so many don’t – and a lot have simply given up. In the last year, I’ve also quickly recognized that it could easily be me, anytime. Terrifying.

Debt, the gig economy, unstable global markets, terrorism, the millions and millions of people migrating – literally walking – away from unstable economies. The list goes on. And on. Scary.

And no matter how much I educate myself further or try to learn new things, it may not even matter. Frightening.