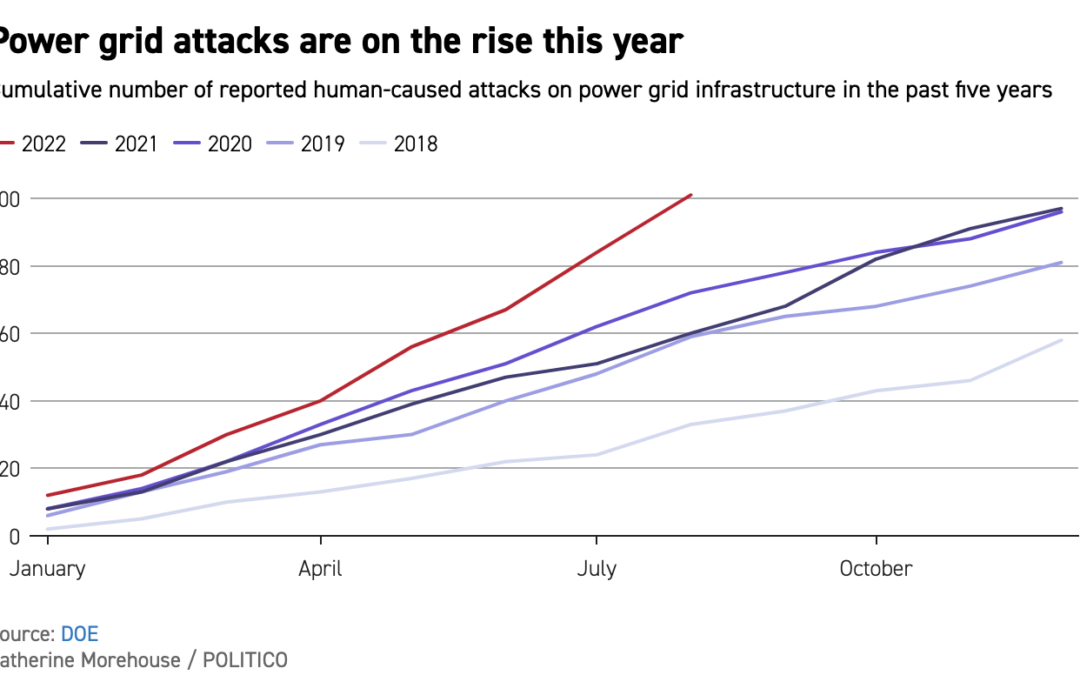 When 2022 started, I set a very simple goal to read more books than I did in 2021. With that in mind, I jumped right in, and on January 1, 2022, I purchased “Lights Out,” a book authored by longtime ABC News Correspondent Ted Koppel. The subtitle is “A Cyberattack, A Nation Unprepared, Surviving the Aftermath.”

In short, Koppel’s book scared the shit out of me. The over-arching theme is, “what happens when the power grid in the USA is attacked?” It wasn’t IF; it was WHEN. Because it has already happened, don’t let little old Jeff’s words sway you. Here’s part of the description of the book:

It isn’t just a scenario. A well-designed attack on just one of the nation’s three electric power grids could cripple much of our infrastructure—and in the age of cyberwarfare, a laptop has become the only necessary weapon. Several nations hostile to the United States could launch such an assault anytime. In fact, as a former chief scientist of the NSA reveals, China and Russia have already penetrated the grid. And a cybersecurity advisor to President Obama believes that independent actors—from “hacktivists” to terrorists—have the capability as well. “It’s not a question of if,” says Centcom Commander General Lloyd Austin, “it’s a question of when.”

Imagine a blackout lasting not days, but weeks or months. Tens of millions of people over several states are affected. For those without access to a generator, there is no running water, no sewage, no refrigeration or light. Food and medical supplies are dwindling. Devices we rely on have gone dark. Banks no longer function, looting is widespread, and law and order are being tested as never before.

Crazy! By the way, this book was written in 2015. We are now close to 8 years later, and in the big picture, more needs to be done in terms of advancements to protect the power grid. In the last month alone, we’ve seen two pretty major attacks on power grids: one in North Carolina that took out electricity in 45,000 homes and one on Christmas day in Washington state, affecting 14,000 homes. Christmas without power. Damn. The question that many are asking is if these are small dry runs for a significant attack soon. Nobody knows. Over 100 attacks on the electrical grid in the USA occurred in 2022. That’s the most in the last decade.

We all have experienced a loss of power, typically for a few hours or maybe one day. Manageable. But ask yourself what would happen if it was a week? Or two weeks. Or a month. The US has three major power grids across the country, but thousands of substations take power wholesale from “the big three.” These little substations are more susceptible to attacks because they don’t have the budget or sophistication to protect themselves, which is what we are seeing. With larger budgets, brainpower, and security, the big three are tougher to penetrate but not foolproof. It’s natural – and it’s scary.

So I read the Koppel book, which you should read. I arguably spiraled a small bit after that, buying another book about protecting yourself from a long-term power outage. I’ve thought about a generator, but I’m not sure I’m there quite yet. Some of the advice was sound, with good instructions on basic things to have on hand in the event of a prolonged outage. So I did put a bin together of those basic recommendations and they are all sitting in a large Rubbermaid container in my house. Other advice was paranoid bordering on insane – like talk to your neighbors and set up an agreed-upon high ground in case of attack. That’s kinda ridiculous. I’m imagining myself walking around to my neighbors, knocking the door and trying to get alignment on a high ground in case of attack. I laugh to myself at what they might say when they close the door after that conversation!